I recently built an API to automate Oracle database installation and patching on Linux containers running on local and cloud infrastructure. This would normally involve pulling media from a local repository, with all required install files and patches pre-staged. However, this project wasn't limited to predefined configurations. The API specification allowed users to pass a list of patches at runtime. The solution needed to automatically download anything not already in the local software catalog.

To download a patch from MOS, I needed to automate these steps:

This didn't seem too difficult. Several blog posts describe how to authenticate with My Oracle Support and download patches. Unfortunately, some rely on manual authentication with MOS on one host to generate the cookie file, then copy the cookie to the automation machine. This isn't acceptable for a fully automated solution or in multi-user environments. Login needs to be automatic, secure, and independent of the API code.

The other documented solutions I found used wget. Linux containers use minimalist filesystems for reduced footprint and attack surface on the container hosts. wget isn't part of the limited container packaging, but curl is. It didn't make sense to install wget just to handle patching with curl already present.

I also assumed the download URL would fit a standard pattern. All I'd have to do was substitute the patch and platform identifiers into the URL. I was wrong!

Before downloading patches from MOS, the session needs an authentication token in the form of a cookie. We'll pass a MOS user ID and password to a URL to get the cookie. It's the automation equivalent of entering your credentials here.

Prior to working on this project, I didn't use curl for anything much beyond simple file downloads, but I knew I needed something like this:

The -u/--user flag in curl passes a username and password at the command line. But, supplying credentials as plain text is… very bad. The --digest option enables digest authentication and prevents curl from sending credentials over the wire as plain text. However, this information is still visible in command history and, on a shared Linux system, available to anyone able to view active processes on the system. The -K/--config option instructs curl to read command-line options from a file. This is a better option, but files that aren’t understood within regular security postures (like keys saved in special directories) are subject to being overlooked.
The --netrc and --netrc-file options blend a bit of all three. They tell curl to use a file on the local machine, typically $HOME/.netrc (or $HOME/_netrc on Windows systems) for authentication. The credentials are sent securely to the remote site and aren't visible to other users on the system. The .netrc file is a well-known standard and supports logins for multiple sites. Login information for a site is recorded as three lines of key-value pairs:

With the --netrc option, curl looks for a file named .netrc in the home directory. The --netrc-file option takes a path and filename for the file. I elected to use the latter since it allows more flexibility should I need to specify a non-default location. In curl, cookies are stored in the (appropriately named) Cookie Jar, passing the cookie path to the --cookie-jar flag. The evolving command:

I assumed patch downloads would follow a pattern: https://updates.oracle.com/something, with variables for the patch ID and platform ID, (like "&patch_id=6880880&platform_id=226P") embedded in the URL string. I reasoned that once I found that pattern, I could simply substitute the patch ID and get any patch I needed. Unfortunately, nothing's easy with Oracle. The download URL does not follow consistent patterns and usually doesn't include the patch ID at all. Instead, they reference a file name, file_id, and aru that don't appear to relate to the patch ID itself. For instance, the URL for the latest 19c and 21c OPatch downloads are (in part):

I discovered I needed the file_id and aru to construct a download URL. Some older patches required additional information or used entirely different links. Fortunately, the download URL for any patch is available through the patch search function, which does follow a meaningful structure based on the patch ID:

Platform IDs are standard and published by Oracle (it's 226P for Linux x86-64). I only need to substitute the patch ID. The result contains the download URL in its raw HTTP, normally sent to a browser, as the link under the "Download" button.

For the automation, I captured the search page for a file with the following pseudo code: 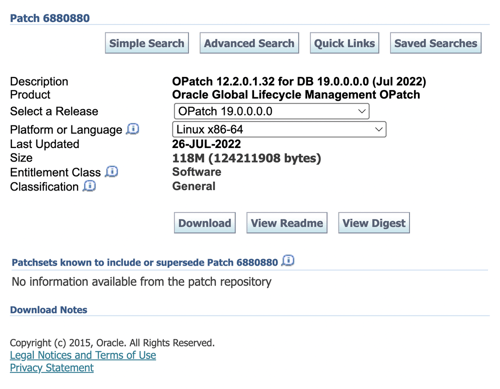 Buried somewhere in the output file is the download link I'll use to (finally) get the patch file. The only problem is finding it! After a lot of trial and error, I landed on a search pattern for finding eligible download links in the MOS search results output:

Links in HTTP pages are preceded by "href," an equal sign, maybe some white space, and then a quote. This looks for boundaries around a URL and removes what comes before and after, leaving just the link. With it, I can download the patch with curl:

Most readers will likely only need to log in, search for a patch, and determine the correct download link. However, if you’re developing automation, read on!

I wanted to include a message in the API output indicating whether the process downloaded a newer version of an existing patch. I decided to use the -w/--write-out option and pass the download size back to the script. I can check the size and report whether something was downloaded and, if so, its size. The curl command is otherwise silent, so the only output is the download size (or an error). I can capture that in a variable:

I ran into some cases where the search page produced multiple matching URLs for a single patch and platform ID. They were typically password-protected or superseded versions. To address those situations, I embedded the URL search string in a for loop.

Convert to a Function

I like writing reusable code. This has applications beyond Docker, so I built it into a function that takes input variables and does the work. (In this version, the file name is known and passed to the function instead of the patch ID.) The patching step using this code sample (more at https://github.com/oraclesean/docker-oracle) runs during the docker build process as the root user and calls the curl commands via sudo, preserving the correct permissions.

With the download function in place, all that remains is building an image and mounting the secret with a .netrc file from the local environment. Docker secrets are defined in two places: the Dockerfile, and the build command.

The docker build command mounts the secret and makes it available to Docker:

This tells Docker to mount a file, ~/.netrc, into the build process with an ID of "netrc". A corresponding RUN instruction in the Dockerfile consumes the secret by its ID, making the mounted file available to the commands called in a RUN operation::

Breaking down the command:

The .netrc file from the local host is mounted and available only during the software installation and patching operation. Credentials aren't broadcast as plain text, visible to other users on the system, or part of the repository. The secret file is local for users and, as long as the user running the build has permission to read, available only during the RUN operation. The solution is fully automated and portable across users.

If you try this, I’d love to hear from you, particularly if you encounter any URLs that break either the search conditions or find/replace operations!